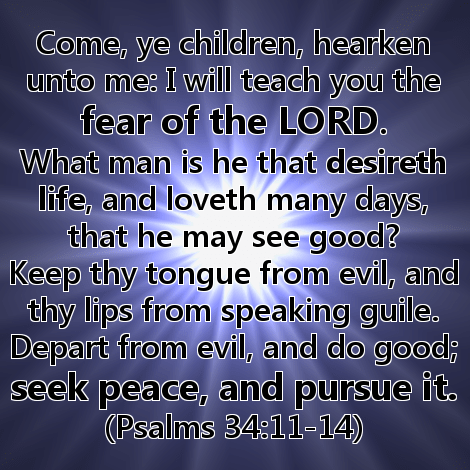 There is a movement going on using peer pressure, unwarranted shaming, and wrested scripture to get people to not vote for Donald Trump against Hillary Clinton, stating that people should not allow the fear of the threat of an anti-Christian Hillary Clinton presidency (and God’s judgement that may come with it) to motivate them to vote for a pro-Christian Donald Trump presidency. Does the Bible really teach us to not allow any type of fear to affect any aspect of our lives? Or are there good uses for fear? On top of that, do the people in the #FaithTrumpsFear movement even obey their own doctrine? Who are we to fear? Are we never to fear any man or entity besides God? And how do we fear God?

“And others save with fear, pulling them out of the fire; hating even the garment spotted by the flesh.” (Jude 1:23)

Here Christians are instructed to use fear. I myself came to Jesus Christ because I feared death and Hell. The law was the schoolmaster that lead me to Christ—it taught me that I’m a sinner and deserve an eternity of torment in Hell. The threat of an eternity in Hell motivated me to take the future seriously (just as fear moved Noah to build the ark to save his family from God’s judgement on the world—Hebrews 11:7). The gospel then taught me of the love of God, how that Jesus Christ died on the cross for MY SINS, taking MY punishment upon himself, so that if I fully put my trust in him then he’d save me (1 Corinthians 15:1-8; John 3:16). I did, and he did. Then came the fullness of his love and the peace that passeth all understanding which comes with it, not just in the form of a promise of the free gift, but Jesus himself as the free gift entered my heart and keeps my soul. His perfect love cast out my fears of Hell, because Hell is no longer a threat to me—I know, not just blindly believe, I know that I have everlasting life and will go to Heaven when this body of mine dies. How sad it would have been if the preacher, because he didn’t want to frighten anyone (or hurt anyone’s feelings), avoided telling of the danger I was in, and therefore did not motivate me to believe in the Christ! I will never again fear for my soul, because Jesus keeps it, but there are other areas where I must fear.

“Render therefore to all their dues: tribute to whom tribute is due; custom to whom custom; fear to whom fear; honour to whom honour.” (Romans 13:7)

As we see, there are times to fear men, to an extent. We are to fear the power of the government (Romans 13:3), and we are to obey the government as long as it does not command us to disobey God (Romans 13; Acts 5:29). We are also told that servants are to submit to their masters in fear and trembling (even the mean ones), as we read in 1 Peter 2:18, Ephesians 6:5, and Colossians 3:22. And we are told to fear our parents (Leviticus 19:3). All of this motivates us to do right (if we remember to fear and obey God above all—Nehemiah 7:2; Psalms 96:4; Acts 5:29). Even so, in this election it is not about fearing Hillary Clinton as a person, but about fearing the judgement that God will administer (or at least allow) in the form of unjust persecution from our government that we will be bringing on ourselves and our children if we foolishly refuse to vote for the pro-Christian guy in this race who is able to win and actually do some good.

“The desire of the righteous is ONLY GOOD: but the expectation of the wicked is wrath.” (Proverbs 11:23)

We’re not supposed to desire bad things to happen. Even as a child I was wise enough to realize that I didn’t want to be judged for my sins and be cast into the lake of fire; I have since grown wiser in Christ, not more foolish. David prayed for mercy, not to be judged:

“Hear my prayer, O LORD, give ear to my supplications: in thy faithfulness answer me, and in thy righteousness. And enter not into judgment with thy servant: for in thy sight shall no man living be justified.” (Psalms 143:1-2)

Not voting against Hillary Clinton’s wicked government policies because you hate Donald Trump personally and just ignore his good government policies is foolish. You have wicked sins in your past (and even now have sin in your life—1 John 1:8), and you deserve to be judged. You deserve no good thing. Donald Trump, just like you, is a sinner. However, Donald Trump does want to do what is right in government. He wants to preserve religious liberty (and even do away with the oppressive Johnson Amendment to not just preserve but restore some religious liberty). Donald Trump has many great policies—better even than Ronald Reagan (who was also an immoral, Hollywood, pro-abortion, Democrat before). Don’t be so foolish as to desire and bring upon your children judgement and severely oppressive persecution when you’re given a better choice: vote for the guy who is pro-Christian and wants to prosecute the evildoers (especially the corrupt people in our government), which is the most important role the government is given the authority to play (Romans 13)—vote for Donald Trump.

So we should fear? What about 2 Timothy 1:7 and the “spirit of fear” many like to quote? Let’s read it with verse 8 as well to get a bit more context:

“For God hath not given us the spirit of fear; but of power, and of love, and of a sound mind. Be not thou therefore ashamed of the testimony of our Lord, nor of me his prisoner: but be thou partaker of the afflictions of the gospel according to the power of God” (2 Timothy 1:7-8)

Now that we’ve read it in context with verse 8, it is clearly seen that this is talking about how we should not be ashamed of the testimony of Jesus and should not allow fear to keep us from witnessing even if that causes us to be persecuted. That’s a good bit different than saying we shouldn’t vote for pro-Christian Donald Trump because of the threat of anti-Christian Hillary Clinton. What about these other verses?

“And fear not them which kill the body, but are not able to kill the soul: but rather fear him which is able to destroy both soul and body in hell. … Fear ye not therefore, ye are of more value than many sparrows.” (Matthew 10:28 & 31)

Again, go read the context and you’ll see that Jesus’ point is that we should not allow fear to prevent us from witnessing. We should not allow fear to paralyze us and prevent us from witnessing of the Lord and Savior Jesus Christ, because that kind of fear is wicked and harmful, but other fear (like care) which motivates us to witness and to do right is good. Some examples of good fear: I fear for my children’s souls, so I try to live right to have a good testimony, that they might see Christ in me and believe in him someday because of my witness. I fear for my neighbors’ souls, and so I go out and witness to them, pass out tracts, and invite them to church. I fear for my country and the religious liberty that our forefathers fought so long and hard to win for us, so I fight the wicked wresting of scripture in this election, defend when Trump is falsely accused and slandered (he’s pro-Christian, not anti-Christian), and I voted for Donald Trump. By faith, God’s Holy Bible guided me, and (working with that faith) fear motivated me to vote for Trump. Just as with Noah:

“By faith Noah, being warned of God of things not seen as yet, moved with fear, prepared an ark to the saving of his house; by the which he condemned the world, and became heir of the righteousness which is by faith.” (Hebrews 11:7)

If a friend of yours talks to you about #FaithTrumpsFear, trying to pressure you into not voting for Trump, don’t be afraid and give into the peer pressure, but simply ask your friend a few questions. Do you lock your doors at night? Do you own a gun? Do you keep your passwords secret? Do you teach your children not to get into cars with strangers? Do you take other precautions to protect your family, their well-being, and their future? Why are you allowing fear to affect your decisions? Is not God in control? Will not God protect you? Come back and talk to me about not fearing again after you throw out your guns, leave your doors unlocked and open at night, etc. As for me, I’ll continue to obey God’s word and care about and try to protect my family, and one way I’ll do that is by voting for Donald Trump and his pro-Christian policies that will help protect our religious liberties.

I’ll leave you with this: those people’s way sounds right to them, but it leads to pro-death Clinton; don’t be as the simple ones that just believe every word against common sense and are destroyed, but instead run from the evil (Clinton in this case) by voting Trump. It is right, not wrong, to vote for Donald Trump—choose life! 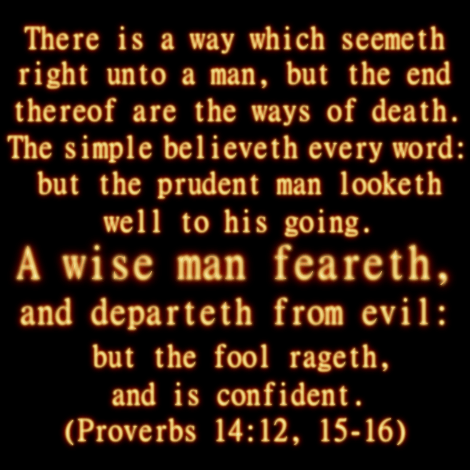