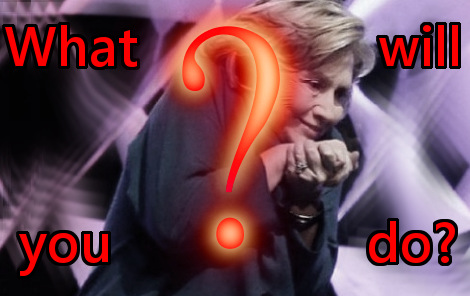 Will Christians choose to seal their own doom this election?

Michel Snyder wrote an extremely important article titled “Apostate Evangelicals Are Poised To Become The Deciding Factor In A Hillary Clinton Election Victory,” which is a must read for every Christian at this critical time right before the election. I would like to comment on a few quotes from his article before giving the link to it. Says Snyder,

If evangelical Christians acted as a single voting block they could determine the outcome of every single presidential election. Unfortunately, that simply is not going to happen.
A survey that was recently conducted by LifeWay Research found that only 45 percent of Christian evangelicals plan to vote for Donald Trump and 31 percent of Christian evangelicals plan to vote for Hillary Clinton.
As I have said before, a vote for Hillary Clinton is an act of unmitigated wickedness.
Hillary Clinton has made support for abortion one of the central pillars of her long political career. In fact, I don’t know if there is any politician in America that is more associated with abortion than Hillary Clinton. Since Roe v. Wade was decided in 1973, more than 58 million babies have been murdered in the United States, and Hillary Clinton’s hands are drenched with their blood.
If you vote for Hillary Clinton, your hands will be drenched with their blood too.
…if you cast a vote for Hillary Clinton, you are casting a vote for the most evil, wicked and corrupt politician that this nation has possibly ever seen, and you are publicly endorsing the sinful positions that she is proud to stand for.
The frightening thing is that this election might be the last chance for evangelical Christians to shape the political direction of this nation, because the truth is that demographics are rapidly shifting, and this includes the demographics of the evangelical community…

How very true! And the last paragraph above deserves special emphasis. It is amazing to me how many pastors do not realize the extreme danger they face. Are they blind to the fact that Hillary plans to bring in many thousands more Muslim refugees? This is obviously the Democrat plan to assure that never again will Christians be able to shape the political direction of the USA. It would be good for these pastors to minister in Saudi Arabia for awhile to get a taste of reality. In Saudi Arabia, the center of Islam, the Bible is outlawed, churches are forbidden, Christians are killed or very severely punished for their faith, and Muslims live in fear of death if they convert to Christianity. Because of this, extremely few people are won to Christ in areas where Muslims control the government. Is that what these preachers want for the USA? What I see is a large number of preachers who are just too lazy to read their Bibles, and so are falling for false doctrines based on scripture taken totally out of context. Or else are just too lazy to do basic research to find out what the candidates actually stand for, and so are making emotional decisions based on what they are spoon feed on TV. How utterly stupid and foolish.

Here is what we can expect to happen if American voters elect Hillary Clinton to carry out her plans:

Any born-again believer, who actually reads his Bible and carefully checks out current news for truthfulness can easily see that the above facts are true. Is this what we want for America?

There are two points with which I disagree in Snyder’s otherwise excellent article. First, he states that

Most of the media coverage has focused on Donald Trump, but I feel that this election is far more about Hillary Clinton. The things that her and her husband have done have been well documented, and if the American people willingly choose her they will know exactly what they are doing.

Actually, media coverage has focused only on Trump’s past sins (which are actually extremely minor compared to Hillary’s), and has almost totally ignored his pro-Christian policies. Actually, Donald Trump has the most pro-Christian policies of any presidential candidate in my 69-year lifetime. This fact needs to be shouted from the housetops. His policies are even better—by far—than were those of Ronald Reagan. Anyone who will just go to http://donaldjtrump.com/ and read his policies will see that that is the case. David was Israel’s greatest king, and a man after God’s own heart. But if all anyone considered about him were his sins, he would be treated no better than Trump by evangelicals were he to run for president of the USA. David was, after all, guilty of adultery, murder, and polygamy. Trump hasn’t murdered anyone. Is Trump’s cussing worse than David’s murder? “All have sinned and come short of the glory of God” (Romans 3:23), including you and I. Trump truthfully stated recently that he has never claimed to be a perfect person, and said that he is not proud of some of the language he has used. At least he is not a hypocrite like many of his critics. Start listening to Trump’s speeches, instead of just blindly swallowing the lies and slander of the #never-trump hypocrites, and you will see a man who truly loves the USA and freedom. I’m not just voting against Hillary; I’m voting—in fact, have already voted—for Trump. I think he will be a greater president than Ronald Reagan.

Second, Snyder says, “Look, you don’t have to vote for Donald Trump or anyone else to be a good Christian.” That is simply not true. A vote for Donald Trump is a vote for life, and a vote for Hillary is a vote for death. At this moment in time the only person on earth with the potential to stop abortion in the USA is Donald Trump, not Darrell Castle, or any other third-party candidate. After failing to win a sufficient following in the primary, it is sin for third-party candidates to continue to run; and it is sin to vote for them. If they were really good men, they would support the best candidate who still has a chance to win, not draw votes away from him so that a wicked Jezebel can win. The fact is, no true Christian will vote for Hillary. So, if a Christian is deceived into voting for anyone but Trump, then that will be a vote Trump will lose, not one Hillary will lose. Hillary will therefore be one vote closer to continuing the murder of innocent babies. In the book of Deuteronomy, God very clearly commands us to choose life, not just to not choose death. In this election, it is impossible to choose life without choosing Donald Trump. A vote for any other presidential candidate is a vote for death.

In First Samuel chapter 8, it is written that the children of Israel very wickedly rejected the rule of judges (in which God was their king) because of the sins of Samuel’s two sons, who as judges “turned aside after lucre, and took bribes, and perverted judgment.” God warned them how horrible their life would be under a king, then concluded by saying, “And ye shall cry out in that day because of your king which ye shall have chosen you; and the LORD will not hear you in that day” (1 Sam. 8:18). But they insisted on completely changing their form of government to a rule by man instead of by God. So God told Samuel, “Hearken unto their voice, and make them a king” (1 Sam. 8:22); then God let them suffer terribly under every king they had.

In this election we are deciding whether or not to totally replace our Bible-based capitalist economic system (advocated by Trump) with atheism-based socialism (advocated by Hillary), and our republican form of government (advocated by Trump) with dictatorship (advocated by Hillary). The fact that Samuel’s sons were sinners was no justification for Israel rejecting their God-given form of government. Nor is the fact that Trump is a sinner justification for us to reject our very similar form of government which Trump is fighting to preserve for us. Rejecting freedom and life because Trump is a sinner (just like you) is wickedness for which a bitter price will be paid. “There is none good but one, that is, God” (Mark 10:18). If you can’t vote for a sinner who is trying to preserve your freedom, then you can’t vote for anyone, as Jesus is not a candidate for POTUS.

Is God in control? Of course, but that does not mean he will force his will upon the outcome of an election. If a nation refuses to choose life as he commands, he may allow them to be cursed by what they have chosen. God allows us to choose between life and death, and we had better choose life. Will you obey God’s command? Here it is clearly stated in God’s own words:

Snyder chose a very truthful title for his article. Only “apostate” Christians would vote for Hillary. An apostate is: “a disloyal person who betrays or deserts his cause or religion or political party or friend etc.” (WordNet); “One who has forsaken the faith, principles, or party, to which he before adhered; esp., one who has forsaken his religion for another; a pervert; a renegade.” (1913 Webster).

I do not believe that Hillary is predestined to win this election, but I do believe that it may be very close. God is giving us a clear choice between good policies and evil policies. Your vote, or misplaced vote, or failure to vote, may determine whether we, as a nation, choose life and blessings, or death and cursings.

If your family were caught on the third floor of a burning house, with the only way of escape being a ladder extended to you by a fireman demanding that you “get on the ’blankety-blank’ ladder and we’ll bring you down to safety,” would you choose to say, “Thank you, Lord, for sending this fireman.” Or would you say, “This man cussed, so we can’t climb down his ladder lest we be a partaker of his sins.” Don’t be a fool: vote for Trump, who at least is a true American, and is trying to save your family and nation from total destruction at the hands of an atheist woman who wants to burn our way of life to the ground.

Here is the link to Snyder’s very informative article: