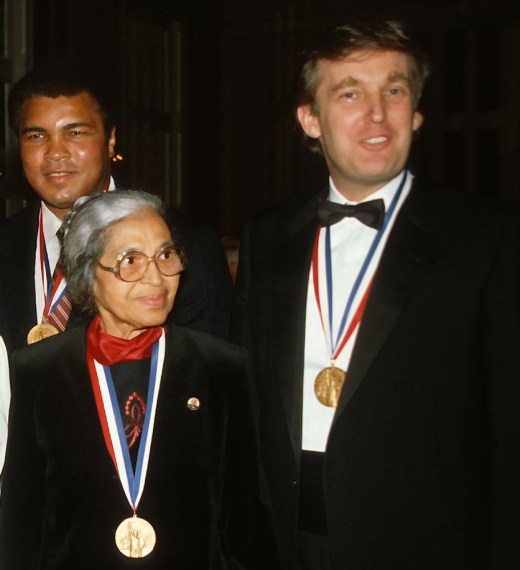 When you see people screaming “racist” nowadays, you can mark it down that (more often than not) they are pushing the humanist, NWO, establishment agenda and (more likely than not) they believe in Evolution (their retarded god). It really saddens me to see some Christians actually using this humanist way of defamation—using the “racist” card. I personally hate the word “racist” because it makes it sound as though there is more than one race of humans, like some are less evolved than others—that is extremely demeaning and prejudice. You can be happy to know: we did not evolve; we were created by the God of the Bible—we are one blood, as all of us are decedents of Adam and Eve.

Now, about Donald Trump: I have done a lot of research into the claims from the mainstream media, the fake conservatives, the glen-becks in sheep’s clothing preachers, etc. about Donald Trump being a “racist” and I have found that they are flat out LYING. Not too surprising though, right? The hypocrites caught lying and slandering again. Not only does Donald Trump appear to NOT be prejudice against people based on the color of their skin, but he has fought AGAINST that kind of wicked prejudice. Trump even married a legal immigrant (Melania Trump), he has a Jewish son-in-law (Jared Kushner), and he has a black woman (Katrina Pierson) as a spokesperson. Here is a list of various things that show Trump is not prejudice [NOTE: I hate to even have to point out skin color and stuff at all, but it must be done in this article to emphasize that Trump is not prejudice]:

Watch this black Trump supporter use common sense to tear apart the stupid idea that Trump is racist because David Duke said something nice about him:

Watch William Campudoni, a Puerto Rican boxer who grew up in Spanish Harlem and was on the brink of being homeless at the age of 22, tell how Donald Trump greatly affected his life for good:

Even Geraldo Rivera, a “Jew-Rican” (as he calls himself), and someone who doesn’t like Trump, and has even searched diligently for tapes to attack Trump (and had to apologize when he couldn’t find anything), but even he has said that Trump is “probably among the LEAST racist politicians on the national scene.” Watch in the video below:

There is a LOT more, and so I’ll probably be adding to this later, but this should be enough for the time being.