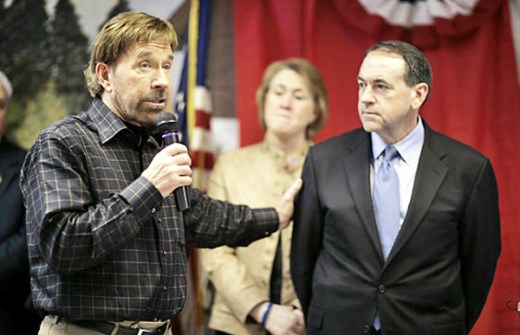 This man should be the next U.S. president

First of all, the next president of the United States should not be Hillary Clinton or Bernie Sanders. Hillary will send us down the same path of destruction as Obama, and Bernie will send us down an even worse path – if worse is even possible!

Every adult American needs to see the movie “13 Hours,” then ask yourself: “Where was Hillary during the Benghazi attacks and does her type of AWOL leadership demonstrate what we need as commander in chief, especially with ISIS and al-Nusra on the hunt for Americans here and abroad?”

To me, any one of the GOP candidates would make a good president. Some of them could even be great. All of them would be far superior to Barack Obama, Hillary Clinton or Bernie Sanders.

Of course, my personal favorite is Mike Huckabee. Most know my wife, Gena, and I were on the campaign trail with Mike for five months in 2008. During that time, we clearly saw his vision and concern for our country as well as his executive experience to unite and lead our country forward. Mike had, and continues to have, a message that resonates with the American people and is a man of great authentic character.

Advertisement: Chuck Norris provides real solutions to our county’s problems and a way to reawaken the American dream in his best-seller, “Black Belt Patriotism.”

He has supreme executive leadership experience as governor of Arkansas from 1996 to 2007.

He has already run against the Clinton machine multiple times throughout his years as governor of Arkansas.

He is pro-Israel, pro-military and knows the Middle East better than any candidate.

He’s been fighting [for] conservative causes his entire adult life. The 22 conservative leaders cited in the National Review could never make a case against Huckabee as a principled consistent conservative.

He’s rallied millions of citizens for years behind various fights for freedom, family and faith via his Fox News “Huckabee” show.

In 2008, very few people knew who Mike Huckabee was, but because of the “Huckabee” show, over the last six years Mike has become very well known and has his own notoriety to draw crowds to hear his message.

What most people seem to have forgotten is that Mike came in second place behind John McCain in the 2008 GOP primaries. In fact, when the totals came in, Mike had “more than 20 percent of all the votes cast nationwide.” He not only won Iowa, but swept many of the southern states on Super Tuesday.

I believe Mike would have won the nomination if Sen. Fred Thompson had not jumped in the race at the last minute to siphon off votes in South Carolina. It appeared to be a strategy implemented by the GOP establishment.

Historian Dr. Timothy Stanley agreed. He cited Aaron Blake from the Washington Post, who explained how Huckabee “had a tremendous potential that went unrealized in ’08. Huckabee quit early due to a shortage of cash, so we never got to see how well he could run in a great number of states. Moreover, his early performances were hindered by the candidacy of Fred Thompson – a dour, sour old stick who only seemed to be in the race to hurt Huckabee. It’s fair to say that Thompson denied Huckabee a win in South Carolina and thus the momentum he needed to go the distance.”

And to the person who might say, “But Mike is presently trailing in the polls,” I’d ask: “Since when have polls hijacked the American voter before he or she even votes?”

Just because the media have tried to narrow down the choices doesn’t mean the voters have to. We all want to be on a winning team, but we should never hand over our convictions and votes because media or pundits tell us there are only two or three viable candidates.

Mike may not be the “flavor of the day” to the temperamental media or cause a media frenzy like certain candidates do. However, highlighting hype is no substitute for substance, and substance is what we need more than ever in the Oval Office. We already know what voting for smoke and mirrors can get us: Obama.

One of the things I repeatedly tell people is: Vote your conviction even if it’s not what’s most popular, and rest assure that America’s founders and God Himself back you because you’re being true to who you are and what you believe.

I’ve wondered if Ronald Reagan himself could be elected in today’s political environment. I would propose that Huckabee is actually more like Reagan than any other candidate, and I’m not alone.

In his article, “Is Huckabee the Next Reagan?,” historian Dr. Timothy Stanley summarized Mike’s uniqueness among the presidential candidates: “But none of these men has Huckabee’s unique ability to speak through the television cameras and straight to the viewer at home. And, aside from Santorum, none of them has run for the nomination before. Republicans are typically cautious voters who encourage a candidate to run twice, or even thrice, before nominating them: … George H.W. Bush and Reagan were veterans of the presidential primaries. As such, Huckabee enters this race with a key asset: He’s a conservative statesman. His history alone ought to guarantee him top-tier status.”

Few knew Ronald Reagan better than Ed Rollins, who served in the administrations of Presidents Nixon, Ford and Reagan, including serving two tours of duty at the highest level of the White House as assistant to the president and White House political director. Rollins also served as the national campaign director to Ronald Reagan in the 1984 presidential election in which Reagan won 49 states.

Rollins described Huckabee in this way: “Gov. Huckabee has probably inspired me as much as Ronald Reagan … he can connect with ordinary voters. I was with the old Reagan and I can promise you this man comes as close as anyone to filling those shoes.”

Mike truly is a first-class patriot and a renowned man of integrity. Our country can use his caliber of character in the White House, not only to help restore the Oval Office but also our nation.

In the end, whoever the American voters decide will be their choice for the Republican candidacy, I will certainly support and encourage others to do the same. Like I said, any of them will be good for our country. And it is only by rallying around that single GOP candidate that we are going to ensure the presidential win and restoration of our country.