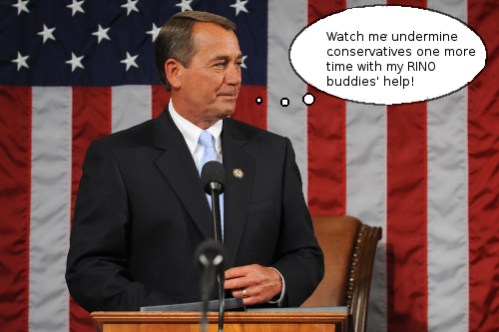 John Boehner must not be allowed to do us any more damage.

Boehner must not be allowed to continue as Speaker of the House past this month.

Boehner must be replaced with a true conservative, not with another RINO like Paul Ryan. If we wanted the Democrats agenda, we would have voted Democrat. There is nothing quite as obnoxious as a jackass trapped in an elephant body.

Remember: the Speaker of the House is second in line to become president. If the president and vice-president should both be killed, the Speaker of the House becomes POTUS. This is a very serious election. A strong leader with moral integrity is vital. Click here to phone your Representative now, and tell him to vote for a truly conservative, non-establishment Republican.