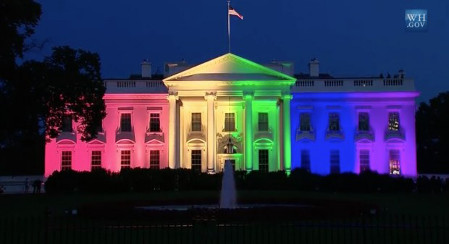 The most abominable sight in the history of the USA.

The most shameful, vile, wicked, evil, abominable government the USA has ever had displaying its PRIDE. Let it hear this warning from God: “Pride goeth before destruction, and an haughty spirit before a fall” (Proverbs 16:18).

When a Republican is president, the atheist-socialist people of the liberal news media always do everything in their power to shut the government down. But when a Democrat is president, they always slant “shutting the government down” as something horrible and destructive that must be prevented at all costs.  Of course! What else should we expect?  They don’t want implementation of their atheist-socialist agenda delayed when they are in power. But what is the truth? Should the United Sodomites of America government be shut down? Let’s consider the facts:

Of course such a wicked, vile, bloody, treasonous government should be shut down! Only brain-dead morons and traitors would think otherwise. The future of our children and grandchildren is at stake. Defund it! Stop it in every way possible before it has destroyed our country beyond repair. Don’t let it do any more damage. Keep it shut down as long as it takes to install a more God-fearing government. In the last election, the American people sent professing Republicans to Washington by a landslide to shut the Obamannation government down—only to be betrayed by most of them who are just a bunch of lying RINOs (Republicans in name only), who in ideology and practice are liberal Democrats, falsely claiming to be Republicans, who know what to promise to get votes, but have no intention whatsoever of keeping those promises.

I oppose the election or re-election of any Republican candidate for any office who in any way opposes or hinders the shutting down of the Obamanation government. That means I oppose McConnell and Boehner and anyone that supports their continuing in office. Recall elections should be held to immediately remove those two evil men from office, and remove along with them every congressman that supports their continuing in office.

BEWARE!!! Praise God that since the above was written John Boehner has announced his resignation—to be effective Oct. 30—, and will soon be gone. But do not under-estimate the damage he can do during his remaining month in office. There are at least three reasons that he has resigned at this time:

Boehner has resigned. Now is the time to pressure our congressmen to insist that he be forced to step down immediately. He should not be allowed to influence future legislation as a lame duck, and he should not be allowed to determine who his successor will be. Else, we will just continue to see more Demoncrap leadership undermining America and our children’s future.