During the GOP presidential candidate debate in October of 2007, Chris Matthews asked all of the candidates to answer this simple question: “How do you think the economy is doing?” The answers given must not be forgotten, for they reveal who among those candidates knows the most about the economy, and therefore is capable of leading our country back to economic prosperity.

One by one, John McCain, Mitt Romney, Rudy Giuliani, Fred Thompson, and all the other candidates except one said that the GDP was experiencing extraordinary growth under Republican President George W. Bush, and was doing great; when in fact—as we so painfully know now—the economy was actually in crisis and was on the brink of total collapse. By their seriously wrong answers, these men showed that they were either lying or else totally out of touch with reality. Yet they were wanting us—and some of them are still wanting us—to trust them with the leadership of our country!

The last man to answer was Mike Huckabee, and he was the only man to have the correct understanding of the dangerous state of the economy. The chief executive officers of big companies may be getting big bonuses, he said, but from the middle class down people were struggling to pay the rent because the economy is in decline. The average family in America is hurting, Huckabee said, and corrections needed to be made to keep the economy from getting worse. Was he right? Yes, he sure was! But for this truthful answer he was laughed to scorn by the other candidates, and by the Wall Street Journal, National Review, and the Club For Growth, the Cato Institute, and Rush Limbaugh. But—and don’t ever forget this—he was right, and they were wrong!

During the primary, Mitt Romney spent money like it was water, yet lost anyway. Many of the other candidates also spent huge sums of money. Mike Huckabee—operating on a shoestring budget—got more votes per dollar spent than any other candidate. That, my friends, demonstrated his superior ability to manage money. An ability that needs to be put into the White House at the earliest opportunity.

Huckabee was right about the economy in 2007, and Huckabee is right now about what is needed to revive America’s economy. Most people do not seem to understand that the USA is on the verge of bankruptcy. Huckabee is one of the strongest proponents of the Fair Tax. If you don’t know about the Fair Tax, go to www.fairtax.org and learn. The Fair Tax is the main hope for America’s economy to recover—that is, after the greatest hope. And what is the greatest hope?

America’s greatest hope for economic recovery is to return to a pro-Israel foreign policy. Remember well what the prophet Isaac said to Israel: “cursed be every one that curseth thee, and blessed be he that blesseth thee” (Gen. 27:29). God is on Israel’s side. If we want the blessings of God to be upon us, we will be on Israel’s side also. (Click here to learn more about Israel.) Huckabee is by far the strongest pro-Israel presidential candidate, and is the only candidate with a proven ability to lead us back to prosperity, having been very successful during his two and a half years as governor of Arkansas. He cut taxes 94 times, yet lead in rehabilitating the interstate highway system from one of the worst in the USA to one of the best. He also lead in improving Arkansas’s parks. Those two projects required tax increases, but were taxpayer approved tax increases—the highway project was approved by an 80% vote of the people! When Huckabee left office, Arkansas had a surplus of $850 million—a state record! Did you get that? When Huckabee left office, Arkansas had a surplus of $850 million—a state record!

Huckabee was the only man right about the economy in 2007. He is right today about how to fix the economy. And he is the right man to be our next president. 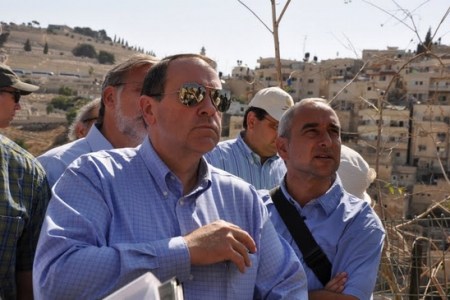 Huckabee has made many trips to Israel. He knows the situation there well. And he is personally acquainted with Israel's leaders.