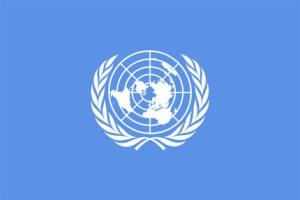 The Democrats pledge allegiance to the United Nations flag (above), not to the Stars and Stripes. That is why they protect the burning of United States flags as free speech.

It is high-time for the truth about the Democrat Party to be clearly stated.

No true Christian, no true American, no honest person, no true believer in God, no pro-life person, no lover of freedom can vote Democrat. Perhaps in times long past it was possible, but not now.

No true Christian can be a Democrat because the Democrat Party leaders advocate the murder of unborn babies.

“If you want proof that President Obama’s Executive Order on taxpayer-funded abortion was a sham, look no further than Pennsylvania”, says House Republican Leader John Boehner (Ohio)….the Health and Human Services Department is giving Pennsylvania $160 million to set up a new high-risk insurance pool that will cover any abortion that is legal in the state. (Obama Administration Approves First Direct Taxpayer Funding of Abortion Through New High-Risk Insurance Pools)

Consider what the Bible says about abortion in Exodus 21:22-25:

22 If men strive, and hurt a woman with child, so that her fruit depart from her, and yet no mischief follow: he shall be surely punished, according as the woman’s husband will lay upon him; and he shall pay as the judges determine.
23 And if any mischief follow, then thou shalt give life for life,
24 Eye for eye, tooth for tooth, hand for hand, foot for foot,
25 Burning for burning, wound for wound, stripe for stripe.

Intrepretation: if men get into a fight, and injure a woman so that she gives birth prematurely,—but the baby survives uninjured—, then the men shall be punished as the woman’s husband and the judges determine. However, if the baby dies or is injured, it shall be done to the men as they did to the baby. If they put out an eye, then one of their eyes shall be put out. If they sucked out the baby’s brains, then let their brains be sucked out. If they burned the baby with chemicals, trying to kill it in the womb, then let them be burned with chemicals, trying to kill them. Abortion is cold-blooded, pre-meditated murder.

No honest person can be a Democrat. The religion of the Democrat Party is humanism (the religion of atheism), which teaches that it is OK to lie to achieve one’s goals. Example of such a lie:

President Obama pledged that under his health care plan “no federal dollars will be used to fund abortions, and federal conscience laws will remain in place.” (Ibid.)

That was obviously a lie, as the “baby murderer” section of this post shows. Ben Nelson and Bart Stupak used that lie as an excuse to vote for ObamaCare. But that it was a lie was obvious, and they knew it. They would not be Democrats if they were honestly pro-life. They are Democrats and therefore cannot be trusted, as their actions have proven.

But the fearful, and unbelieving, and the abominable, and murderers, and whoremongers, and sorcerers, and idolaters, and all liars, shall have their part in the lake which burneth with fire and brimstone: which is the second death. (Rev. 21:8)

If you vote Democrat, you are a participant in the mass murder of innocent unborn babies. No true Christian can so vote.

Another example of such a lie:

While Congress was working on the health care legislation, Mr. Obama refused to accept the argument that a mandate to buy insurance, enforced by financial penalties, was equivalent to a tax.

“For us to say that you’ve got to take a responsibility to get health insurance is absolutely not a tax increase,” the president said last September, in a spirited exchange with George Stephanopoulos on the ABC News program “This Week.”

When Mr. Stephanopoulos said the penalty appeared to fit the dictionary definition of a tax, Mr. Obama replied, “I absolutely reject that notion.” (Changing Stance, Administration Now Defends Insurance Mandate as a Tax

That was just a lie to get the bill passed. Now for the truth:

When Congress required most Americans to obtain health insurance or pay a penalty, Democrats denied that they were creating a new tax. But in court, the Obama administration and its allies now defend the requirement as an exercise of the government’s “power to lay and collect taxes.”

And that power, they say, is even more sweeping than the federal power to regulate interstate commerce.

Administration officials say the tax argument is a linchpin of their legal case in defense of the health care overhaul and its individual mandate, now being challenged in court by more than 20 states and several private organizations. (Ibid.)

In Romans 3:8 the Apostle Paul says of people who say “Let us do evil that good may come,” that their “damnation is just.” The conclusion one is forced to draw, therefore, is that the entire Democrat Party is headed to Hell.

The so-called “Campaign Reform” bill is another example of the Democrats’ hatred of free speech. That bill was designed to stop all criticism of them right before elections, right when the criticism of them is needed the most. Thankfully, the Supreme Court declared that bill unconstitutional.

The Democrat Party also hates freedom of religion. In case you haven’t noticed, they are no longer using the term “freedom of religion.” The term they now use is “freedom of worship.” Ashley Samelson explained the significance of this change is terminology in an article for First Things magazine:

To anyone who closely follows prominent discussion of religious freedom in the diplomatic and political arena, this linguistic shift is troubling.

Those who would limit religious practice to the cathedral and the home are the very same people who would strip the public square of any religious presence. They are working to tear down roadside memorial crosses built to commemorate fallen state troopers in Utah, to strip “Under God” from the Pledge of Allegiance, and they recently stopped a protester from entering an art gallery because she wore a pro-life pin.

In just a few weeks, the Human Rights Council will once more review the “defamation of religions” resolution in Geneva. The resolution, passed every year at the United Nations since 1999, claims that speech deemed offensive to another faith is a violation of international law.

Given that a fundamental element of any religion are truth claims that by nature may conflict with or offend those of another faith, the efforts of international institutions to restrict expression of these claims go right for the religious jugular. And in reducing freedom of religion to “freedom of worship” in its political and diplomatic pronouncements, the United States can no longer invoke the First Amendment and the Universal Declaration of Human Rights, thus weakening its ability to combat the international movement to criminalize religious speech. (Why “Freedom of Worship” Is Not Enough)

The only freedom Democrats are for is freedom from God and God’s laws. Psalms 2:2-3 perfectly describes the Democrat politicians and their atheist/humanist friends world-wide:

The kings of the earth set themselves, and the rulers take counsel together, against the LORD, and against his anointed, saying, Let us break their bands asunder, and cast away their cords from us.

Read What is freedom? to make sure you know what freedom actually is; else you may lose it in short order.

No true lover of freedom will vote Democrat.

No true American can be a Democrat. It is the Democrat Party that harbors the flag burners and the people that want to destroy all our nuclear weapons, so that we cannot defend ourselves. (Read Is nobody trying to stop this treason?)

Democrats do their best to assure that American soldiers are not even conceived in their mother’s womb; but, if they are conceived, that they are murdered before they are born, knowing that abortion and birth control are setting the USA up for certain defeat. Without soldiers, America cannot defend herself.

It’s a fact that in today’s Europe (depending on the particular country or region) 30% to 50% of newborns are Muslims. In Canada, Islam is the fastest growing religion, and in the US, projections confirm that by 2050 there will be 50 million Muslims—all American citizens.

Islam is a bigger threat than Nazism. Both are supremacists, totalitarian, endorse violence. Islam makes no secret of its desire to Islamize and dominate the world, impose Sharia Law, exterminate the Jews. But unlike Nazism, Islam is wrapped in cotton wool—the guise of religion. Without the shield of religion to hide behind, Islam would be banned in the civilized world since it is a political ideology of hate, just like Nazism. But Islamo-Nazis have recruited the political left in Western countries to their Jihad (Stealth Jihad in USA)

There is only one true God. All the other gods are idols. The true God is the God of the Bible. To reject him is to bring destruction upon one’s self. The Democrats have rejected the true God, and worship instead Evolution—the god of atheism/humanism. They have never seen, heard, smelt, felt, or tasted Evolution, nor have they ever seen him/her/it create life from inorganic matter, nor have they ever seen him/her/it create a new kind of animal. But in blind faith they believe he/her/it exists and can do those miracles. They are religious fools.

The fool hath said in his heart, There is no God. They are corrupt, they have done abominable works, there is none that doeth good. (Psalms 14:1)

The fool hath said in his heart, There is no God. Corrupt are they, and have done abominable iniquity: there is none that doeth good. (Psalms 51:1)

The fear of the LORD is the beginning of wisdom: and the knowledge of the holy is understanding. (Proverbs 9:10)

The fear of the LORD is the beginning of knowledge: but fools despise wisdom and instruction. (Proverbs 1:7)

There are some Democrats in Republican clothing, working hard to undermine the Republican Party. Read your Bible so you can tell truth from error, and so you can tell real Republicans from phonies. Find out what the candidates stand for, ask them pointed questions; and, most importantly, check the records to see how they have voted in the past. Make sure you vote only for God-fearing people, not for phonies such as Mitt Romney or John McCain. Your future, and the future of your children and grandchildren are at stake.