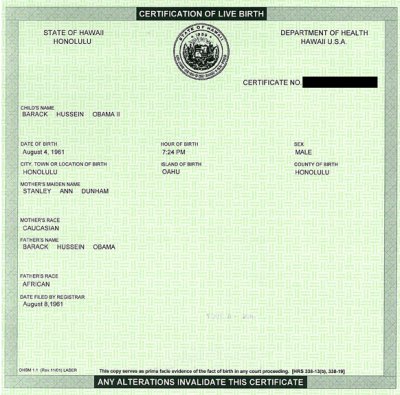 This is the laser printed birth certificate that Obama wants us to accept. Note that there is no doctor's signature, no hospital name, and the the certificate number has been blocked out.

Click here to see a high resolution copy of the above form before the certificate number was blocked out. Ask yourself: why was the number blocked out? Then compare that number with the number on Susan Nordyke’s birth certificate above. The middle numbers should be the same, but are different. Also, there is an additional zero added to the right number of Obama’s document. Also, the Israelinsider points out that “June 6, 2007 appears at the bottom of the image, just right of center, as a backward facing stamp. Where does this come from, and what does it mean? And where is the official seal and signatures that one would expect on an official document of this kind?”

It is absolutely amazing that a copy of Obama’s long-form birth certificate is no where to be found! Repeatedly through our lives we are required to provide copies of our birth certificate to prove that we are who we really say we are — to obtain a driver’s license, enroll in schools, obtain a passport, and for many other reasons. Most of these copies are permanently stored in file cabinets in many various offices, many of which we have completely forgotten about. Yet for Obama there is not one copy to be found! Also, not one doctor or nurse in Hawaii has come forward to say they delivered him. In fact, Honolulu’s Kapi’olani Medical Center refuses to confirm or deny that Obama was born there (BORN IN THE USA? Hospital won’t back Obama birth claim: Honolulu’s Kapi’olani Medical Center refuses to confirm White House letter). It has now become exceedingly clear that Obama does not produce his long-form birth certificate because it does not exist. And if that be the case, then Obama is a usurper with no authority to be in the White House. This is especially disturbing considering that his response to our enemies — Russia, China, North Korea, Iran and others — rushing to build their nuclear weapons, has been to destroy our nuclear weapons. The question that must be answered is, Who’s side is he on? Have we promoted an enemy to be our leader?

I recently received deployment orders for a second deployment to Afghanistan. My orders included a requirement to bring copies of my birth certificate. I will provide a certified copy of my original birth certificate with common, standard identifiers, including the name of an attending physician and a hospital. Every day in transactions across the country, American citizens are required to prove their identity, and standards for identification have become even stricter since the terrorist attacks on 9/11.

In 2008, after pressure from the news media, Senator McCain produced an original birth certificate from the Panama Canal Zone; a Senate Judiciary Committee hearing examined and affirmed his “natural born” status and Constitutional eligibility to serve as President. The U.S. Senate was silent about your eligibility, despite statements from Kenyan citizens that you were born in Mombasa, including your paternal grandmother and the Ambassador from Kenya to the U.S. during a radio interview. Hawaiian state officials claim they cannot release an original birth certificate without your consent.

I have attempted through my chain of command for many months to get answers to the questions surrounding your eligibility. I also sought answers, unsuccessfully, through my Congressional delegation. You serve as my Commander-in-Chief. Given the fact that the certification that your campaign posted online was not a document that the Hawaiian Department of Homelands regarded as a sufficient substitute for the original birth certificate and given that it has been your personal decision that has prevented the Hawaiian Department of Health from releasing your original birth certificate or any Hawaiian hospital from releasing your records, the burden of proof must rest with you.(Terry Lakin Letter to POTUS)

So the soldier must produce his birth certificate, but the commander-in-chief refuses to produce his. Something is extremely fishy about this.

I have just become the 502,033rd person to sign an on-line petition “addressed to the Electoral College, Congress, the Federal Elections Commission, U.S. Supreme Court and others “demanding that the constitutional eligibility requirement be taken seriously and that any and all controlling legal authorities in this matter examine the complete birth certificate of Barack Obama, including the actual city and hospital of birth, and make that document available to the American people for inspection.”

I have also just become the 15,745th person to sign a newer on-line petition “addressed to state secretaries of state, attorneys general, governors, legislatures, election officials and all other controlling legal authorities of elections in the 50 states” demanding that they check the “Validation of Barack Obama’s Constitutional Eligibility,” This petition very likely will eliminate Obama from being able to run for a second term. If even just a few states act upon it, Obama will have no chance of winning a second term.

I encourage you to sign those two petitions also, after first clicking the following links to learn why this issue is so important:

Is this really smoking gun of Obama’s Kenyan birth? Attorney files motion for authentication of alleged 1960s certificate from Africa

Is Obama constitutionally eligible to serve? WND’s complete archive of news reports on the issue

Now do your duty as an informed citizen:

5 Comments to "Two “Where’s the birth certificate?” petitions you should sign"