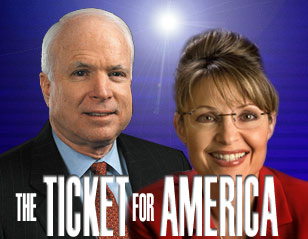 Sarah Palin talks like a conservative, but supports liberals.

According to the April 15, 2010 edition of the BostonHerald.com,

Conservative superstar Sarah Palin opened the door yesterday to joining forces with Mitt Romney for a 2012 White House run – a hot ticket that has some Republicans licking their chops at the prospect of unseating President Obama.

“Sounds pretty good,” Palin declared at yesterday’s Tea Party Express rally on the Common when asked about pairing up with the former Bay State governor – giving the idea a big thumbs-up as she left the stage after her headline speech.

Last night, as Palin stopped for cannoli at Mike’s Pastry in the North End, she said she was “serious” about the idea. Mitt Romney-Sarah Palin in 2012? You betcha!

I’ve suspected that this was coming for some time. When she recently endorsed super-liberal John McCain for reelection to the U.S. Senate, I knew that she is not the conservative she claims to be. Now she more than endorses extreme-super-liberal Mitt Romney, the man that brought same-sex marriage to the United States. If Romney becomes president, he will do us more damage than Obama. He is the absolutely worse Republican candidate in the history of the United States. If Sarah Palin doesn’t know this, then she is too ignorant to be president. And if she does know it, then she is a traitor to the conservative cause. Either way I can no longer consider voting for her, and have marked her off my list of true conservatives.

I warned about Mitt Romney last December in the post titled Mitt Romney — king of Sodomites. If you have not yet read that important post, please do so now; and be sure to follow the links.

One great danger America presently faces is that the next Republican candidate for president might be somewhat conservative fiscally, but an extreme liberal socially. Romney, however, is even a greater danger, as his RomneyCare in Massachusetts is very little different than ObamaCare; Romney isn’t really a conservative even fiscally. But what makes Romney especially dangerous is that his company, Bains Capital Partners, LLC, owns Clear Channel Communications, which airs Rush Limbaugh and Shawn Hannity, and can therefore put great pressure on them to support him in 2012 — just like they supported him in 2008. In a very dangerous sense he owns them, and can promote them, or do them very great damage if they don’t do his bidding.