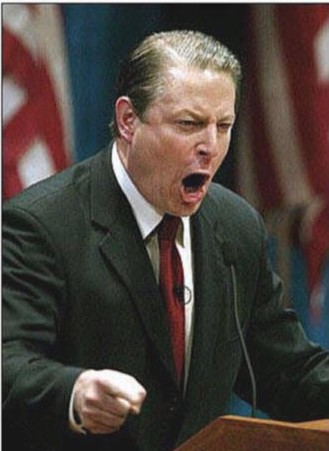 Al Gore: "I invented the Internet." No, Al, you didn't. But you did invent "giobal warming."

Another major update! Faced with Freedom of Infomation Act requests, the main “scientist” promoting Global Warming / Climate Change conveniently “loses” data he obviously never had in the first place. Then admits that there has been no global warming since 1995. Al Gore’s “Inconvenient Truth” has always been just a “convenient lie.” The whole Democrat Party is now exposed to be liars, as are a few liberal Republicans (RINOs).

Climategate U-turn as scientist at centre of row admits: There has been no global warming since 1995

The academic at the centre of the ‘Climategate’ affair, whose raw data is crucial to the theory of climate change, has admitted that he has trouble ‘keeping track’ of the information.

Colleagues say that the reason Professor Phil Jones has refused Freedom of Information requests is that he may have actually lost the relevant papers.

The data is crucial to the famous ‘hockey stick graph’ used by climate change advocates to support the theory.

Professor Jones also conceded the possibility that the world was warmer in medieval times than now – suggesting global warming may not be a man-made phenomenon.

And he said that for the past 15 years there has been no ‘statistically significant’ warming. (Climategate U-turn as scientist at centre of row admits: There has been no global warming since 1995)

Of course, as they desperately cling to their claim that recent ferocious snowstorms somehow prove rather than refute manmade global warming, what they’ll be shoveling will be neither cold nor white. (First Time Ever — Snow on Ground in All 50 States)

Time is always on the side of truth. This winter, God has exposed Al Gore and all his atheist/humanist “global warming” buddies to be the liars they are. We have seen record cold in many areas of the world; the web site of one of their phony “scientific” institutions was hacked, and e-mails displayed to the world in which they conspired to deceive the public; and now as I write these words a record snowstorm batters the Mid-Atlantic coast. That is global cooling, not warming. But never fear — this too will be only temporary.

Here is what God says is Gen. 8:22, “While the earth remaineth, seedtime and harvest, and cold and heat, and summer and winter, and day and night shall not cease.”

Let God be true, but every man — including Al Gore and friends — a liar. Will Al now be man enough to admit that he is wrong and knew it all the time? Very doubtful. Too proud. And the humanist tactic of trying to scare people into surrendering their freedoms so that humanist nut cases like him and his buddies can “save” us from phony emergencies will not change.

Fear no one but God; and no, I don’t mean no one but Obama. No, Obama can’t. That should be obvious by now to all but the brain dead. There is no hope in Obama. Hope only in God.

O Timothy, keep that which is committed to thy trust, avoiding profane and vain babblings, and oppositions of science falsely so called: which some professing have erred concerning the faith. Grace be with thee. Amen. (1 Tim. 6:20)

See, I was right: “And the humanist tactic of trying to scare people into surrendering their freedoms so that humanist nut cases like him and his buddies can “save” us from phony emergencies will not change.”

Many of the people who have swallowed the global warming lie are atheists who pride themselves in being “skeptics,” but who are actually “gullibles.” The truth doesn’t matter to them; they will believe the dogma of their humanist religion no matter what. If you, however, are a true skeptic, you will want to read this report: A skeptic’s Guide to Global Warming Alarmism

Talk about a hypocrite, take a look at this:

Al Gore’s Own Inconvenient Truth: He Uses Lots of Electricity!