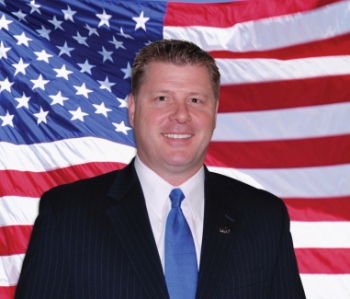 Rick Crawford is the latest Republican candidate endorsed by Mike Huckabee. Always remember that all political battles begin even before the primaries. If we fail in the primaries, there will be no true conservatives to vote for in the general election. We must start to work now, or we will lose then. I don't intend to lose. What about you?

Rick Crawford is the latest Republican candidate endorsed by Mike Huckabee. Always remember that all political battles begin even before the primaries. If we fail in the primaries, there will be no true conservatives to vote for in the general election. We must start to work now, or we will lose then. I don't intend to lose. What about you?

It has been with great joy that I have watched the Tea Party demonstrations during this past year. It has given me some hope that not all American people are as dumb as it had begun to look like they were. To be quite blunt, electing a man to be president who admitted to communist affiliations was unbelievably exceedingly dumb. But it appears that quite a few people are starting to wake up to their mistake. Obama’s approval rating drops more every month as more and more people realize that he is out to totally destroy our economy and way of life. Obama is now the most despised president the USA has ever had, mainly because he despises the USA. A lot can change between now and November. But if the election were held today, the Democrats would probably take the biggest beating in history. This is all very encouraging, and gives a glimmer of hope. But danger lies ahead.

The danger of division

The Tea Party movement is a great, grass-roots movement, and has done a lot of good. But it must not become a new political party, because then it would divide conservatives, and cause us to lose the next elections. If there are not enough of us to control one party, we sure enough can’t win divided into two or three parties.

Almost all true conservatives (pro-God, pro-life, pro-liberty, pro-strong-military, pro-morality) are presently in the Republican Party, and that is where we should stay. There are enough of us to control the party, but we have been lazy and foolish. In many cases, we have merely sat on the sidelines while liberals (conservative only fiscally) determined who the candidates would be. This has to stop now. People who believe in God and morality must get involved in the Republican Party at the local level; and, if necessary, wrest control away from such liberals. Let the liberals go the Democrat Party where they belong. The most important political battles take place even before the primaries. If we are too lazy or indifferent to provide Christian leadership to win these battles, then we deserve the enslavement the Democrat leadership has planned for us. Starting a new political party certainly won’t cure a laziness or indifference problem, but will just make things worse.

Also. most people do not know how to change to a different party, or are just too busy and won’t do it. So the logistics of party change would make it very difficult, if not impossible to pull off — and would only accomplish division.

How true conservatives can control the Republican Party

Most people do not realize that often just a few people control what happens at the local level. Getting the members of your church involved with the Republican Party in your neighborhood may be all that it takes to assure that true conservatives win. Of course, you have to speak up and provide leadership. You have to have the courage to speak up with and for the truth. You can’t be shy or RINOs will run over you with a truck. You may have to “take” the leadership. Make a few phone calls to get more Christian people who value spiritual things involved, and soon there will be more Christians then there are fiscal-conservative-only materialists, and RIGHT SHALL PREVAIL.

You don’t like the candidates? They don’t stand for Christian values? Perhaps God is calling you to run for office yourself. The idea that Christians should not get involved in politics is from Satan himself. There is not one Bible verse that backs up such a stupid idea. Joseph, Mordecai, Moses, Joshua, Daniel, David, and a host of other Bible characters were involved in government. If only atheists run for office, then only atheists will rule. Consider this passage of scripture:

Romans 13:3 For rulers are not a terror to good works, but to the evil. Wilt thou then not be afraid of the power? do that which is good, and thou shalt have praise of the same:
4 For he is the minister of God to thee for good. But if thou do that which is evil, be afraid; for he beareth not the sword in vain: for he is the minister of God, a revenger to execute wrath upon him that doeth evil.
5 Wherefore ye must needs be subject, not only for wrath, but also for conscience sake.

Notice is verse 4 above that a ruler (government leader) is — or at least should be — a “minister of God.” Serving God as a government leader is a legitimate and important ministry.

For if thou altogether holdest thy peace at this time, then shall there enlargement and deliverance arise to the Jews from another place; but thou and thy father’s house shall be destroyed: and who knoweth whether thou art come to the kingdom for such a time as this?

But remember this also, God and your church are more important than politics. Keep your priorities straight. Put God first always. Read your Bible and pray every day. Go to church every Sunday. Else you won’t have the wisdom necessary to properly lead, and you will become part of the problem instead of the solution.

When Joshua became leader of Israel, he faced huge problems. His enemies were giants. They had fortified cities. Humanly speaking it looked impossible to defeat them. (You could kind of say that they had a super majority in congress.) But God gave Joshua some extremely valuable advice, that resulted in victory. It will result in victory for you also. Note especially verses eight and nine.

KJV Joshua 1:1 Now after the death of Moses the servant of the LORD it came to pass, that the LORD spake unto Joshua the son of Nun, Moses’ minister, saying,
2 Moses my servant is dead; now therefore arise, go over this Jordan, thou, and all this people, unto the land which I do give to them, even to the children of Israel.
3 Every place that the sole of your foot shall tread upon, that have I given unto you, as I said unto Moses.
4 From the wilderness and this Lebanon even unto the great river, the river Euphrates, all the land of the Hittites, and unto the great sea toward the going down of the sun, shall be your coast.
5 There shall not any man be able to stand before thee all the days of thy life: as I was with Moses, so I will be with thee: I will not fail thee, nor forsake thee.
6 Be strong and of a good courage: for unto this people shalt thou divide for an inheritance the land, which I sware unto their fathers to give them.
7 Only be thou strong and very courageous, that thou mayest observe to do according to all the law, which Moses my servant commanded thee: turn not from it to the right hand or to the left, that thou mayest prosper whithersoever thou goest.
8 This book of the law shall not depart out of thy mouth; but thou shalt meditate therein day and night, that thou mayest observe to do according to all that is written therein: for then thou shalt make thy way prosperous, and then thou shalt have good success.
9 Have not I commanded thee? Be strong and of a good courage; be not afraid, neither be thou dismayed: for the LORD thy God is with thee whithersoever thou goest.

Michael Steele, Republican National Committee chairman, is not providing effective leadership; and, instead of encouraging and uniting Republicans, is insulting, dividing, and discouraging them. I recommend that funds not be sent to the Republican National headquarters to be misused by this man. Mike Huckabee is the real leader of true conservatives today. With his political action committee, Huck PAC, he is quietly seeking out and helping true conservative candidates all across the USA get elected. He is also personally campaigning for them. One of the things I like so much about Mike Huckabee is that he puts God and country before himself. He is not the typical selfish, ambitious, power-hungry politician. Huckabee also knows how to use money wisely, as he proved during the last presidential primary, when his campaign received more votes per dollar spent than any other candidate. Money sent to Huck PAC isn’t wasted.