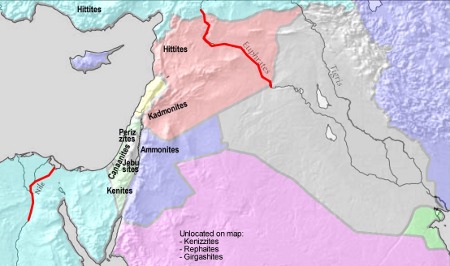 This land was given to Israel by God for a perpetual possession. It belongs to Israel, not to Arabs.

The original image of the above map can be found here. 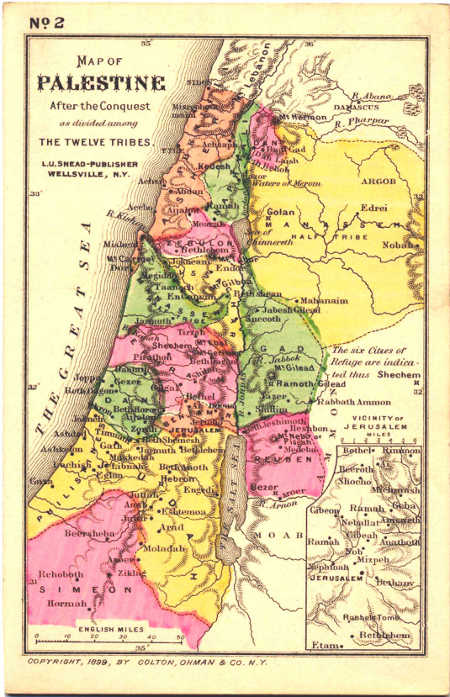 This map shows how God divided the land of Israel among the 12 tribes in Joshua chapters 18-19. Note that God gave Israel both the east and west banks of the Jordan river. The country of Jordan should not exit. 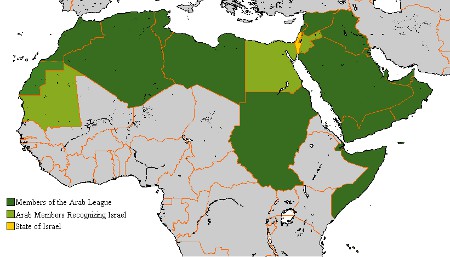 Israel (dark yellow) is extremely tiny compared to the Arab nations (green). There is barely enough land for the Israelis to have a place to live.

Israeli land is being wrongfully occupied by Arab robbers 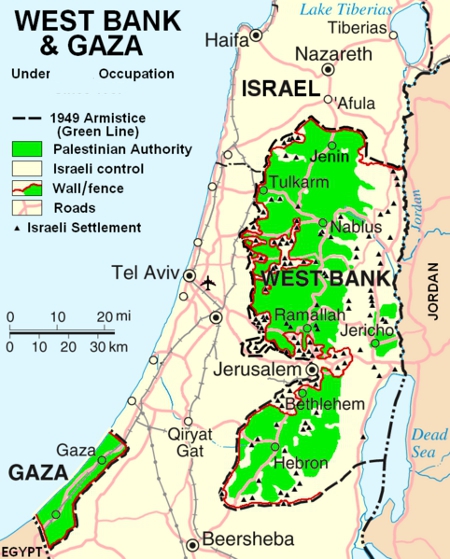 Violent Arabs occupying Gaza, the West Bank, and Jordan take up far more than half of Israeli land, causing a very serious security problem. In fact, it is more than a threat. There is not one area in Israel that is safe. Virtually every day Israelis are murdered by these occupiers.

The questions of the hour are:

O Israel, the fear of man has become a snare unto you. “How long are ye slack to go to possess the land, which the LORD God of your fathers hath given you?” (Joshua 18:3). You should have faith to obey God as he commands you in the Bible:

KJV Joshua 1:1 Now after the death of Moses the servant of the LORD it came to pass, that the LORD spake unto Joshua the son of Nun, Moses’ minister, saying,
2 Moses my servant is dead; now therefore arise, go over this Jordan, thou, and all this people, unto the land which I do give to them, even to the children of Israel.
3 Every place that the sole of your foot shall tread upon, that have I given unto you, as I said unto Moses.
4 From the wilderness and this Lebanon even unto the great river, the river Euphrates, all the land of the Hittites, and unto the great sea toward the going down of the sun, shall be your coast.
5 There shall not any man be able to stand before thee all the days of thy life: as I was with Moses, so I will be with thee: I will not fail thee, nor forsake thee.
6 Be strong and of a good courage: for unto this people shalt thou divide for an inheritance the land, which I sware unto their fathers to give them.
7 Only be thou strong and very courageous, that thou mayest observe to do according to all the law, which Moses my servant commanded thee: turn not from it to the right hand or to the left, that thou mayest prosper whithersoever thou goest.
8 This book of the law shall not depart out of thy mouth; but thou shalt meditate therein day and night, that thou mayest observe to do according to all that is written therein: for then thou shalt make thy way prosperous, and then thou shalt have good success.
9 Have not I commanded thee? Be strong and of a good courage; be not afraid, neither be thou dismayed: for the LORD thy God is with thee whithersoever thou goest.

Neither trust in nor fear the US or UN. Just obey God, and all will go well for you.

Remember well what the prophet Isaac said to Israel (not to you): “cursed be every one that curseth thee, and blessed be he that blesseth thee” (Gen. 27:29). God is on Israel’s side. If you are wise you will be also.

The BBC reports that “Attacks on Israelis ‘fell sharply’ in 2009” — ONLY 566 rockets were fired from Gaza into Israel last year, 160 of them since the Israeli military offensive to stop the rocket attacks last January! Yet Israel continues to be considered the villain, and is demanded to give up more land. What would be happening to Mexico right now had she fired 566 rockets at the USA? Would the world demand that the US give Texas to Mexico to appease them? Let not the nations of the world be hypocrites!