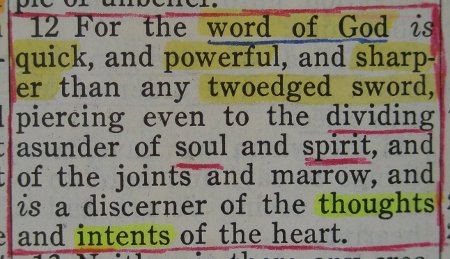 The truth is more powerful than a nuclear bomb.

It is a major mistake to think that because the USA is a superpower with aircraft carriers, nuclear bombs, and high-tech combat equipment she will automatically win wars. Ideas, not guns, win wars. Some wars are fought and won without firing a single bullet. That is why the Bible says,

Woe to them that go down to Egypt for help; and stay on horses, and trust in chariots, because they are many; and in horsemen, because they are very strong; but they look not unto the Holy One of Israel, neither seek the LORD! (Isaiah 31:1)

Ideas win wars. Bullets are also sometimes necessary, but trying to use bullets alone will bring defeat. We will lose in Afghanistan and Iraq unless we change our tactics. If we send every soldier we have to Afghanistan it will be in vain unless we also send the truth. Jesus said to the Heavenly Father, “Thy word is truth” (John 17:17). The Bible is the truth. There is really only one valid reason for our troops to remain in Afghanistan and Iraq, and that is to enforce freedom of religion, freedom of speech, and freedom of assembly, so that the people of those two countries can have opportunity to hear and believe the truth. This is not to say that we should force Christianity upon them at gunpoint. Absolutely not! But neither should we allow Islam or any other religion — including the atheist Humanist religion — to be forced upon them. And no one should be denied his freedom to preach his religious beliefs. Our troops must be free to witness. Missionaries should be allowed in. If everyone is allowed freedom to preach his beliefs, the truth will be heard, even if a lot of lies are also preached — and the truth will set people free.

The fact is, only people who have and believe the truth value freedom. People who believe lies will vote for their own enslavement. For instance, many Muslims believe that Shariah law is their Allah’s form of government. So, given the chance, they will vote to do away with a republic form of government, and will replace it with a Shariah dictatorship, thus never getting to vote again! Under Shariah law freedom of religion, freedom of speech, and freedom of assembly are forbidden. For example, Christians are not allowed to assemble to worship Christ in Saudi Arabia. I personally know people who were forced to leave Saudi Arabia because the government there learned that they were having Bible studies in their own home.

Our troops report that they are forbidden to distribute Bibles, or gospel tracts, or religious literature of any kind in Iraq or Afghanistan. If our own leaders are going to deny the Iraqis and Afghans (and even our own troops) freedom of religion, then why are we there? So that our men can be slaughtered fighting for nothing? The USA has always stood for freedom. Freedom is the idea that you may not force your religious ideas on other people, nor may they force their ideas upon you. You may not agree with what others say, but you are not allowed to stop them from saying it, even if you are totally convinced they are wrong. Nor are they allowed to stop you from voicing your opinions. Unless we can assure that the Iraqis and Afghans have such freedom long enough to learn the truth, there will never be a change in the will of the people, and in the end we will lose both those wars. Our troops will have sacrificed their blood in vain, and those not killed will be forced to return home in shame.

But before we can send the truth to Afghanistan, we must accept it ourselves in the USA, and that “… no lie is of the truth” (1 Joh. 2:21). Isn’t it amazing that people have to be reminded that lies are not true?!

The so-called “War Against Terror,” forced upon us by people our leaders refuse to acknowledge as enemies, whose wicked ideas our leaders refuse to declare to be wrong is emotionally and financially sapping us of our strength. If we think enemies are actually friends, and that the ideas that motive them to attack and fight us are true, then what is the point of this war? We may think we are not at war with them, but they know they are at war with us. However, that war is minor compared the fierce civil war being fought on our own soil. To be strong a nation must speak a common language and be united around a mutually believed idea. The idea that made the USA strong is the idea of freedom. Belief in freedom is the only thing that has held us together. We are a nation of many different cultural backgrounds, and many different irreconcilable religions, but we were united on the idea that every citizen should be free to worship, speak, and assemble according to his own beliefs.

But now we are a nation divided. Many Americans no longer believe in freedom, and look at true freedom as a great wrong to be stopped at all costs. They fight for a false concept of freedom. Freedom, they think, is being allowed to sin and get away with it: fornication, adultery, sodomy, the murder of innocent unborn babies, and the use of the political system to “legally” rob and control their fellow citizens is what this group calls “freedom.” The last thing this group wants is for someone to use true freedom (of speech) to tell them they are wrong. So, they brand any criticism of their sins “hate speech,” and pass laws to ban that freedom. The Bible, they say, is a hate book because it says in Leviticus 20:13, “If a man also lie with mankind, as he lieth with a woman, both of them have committed an abomination: they shall surely be put to death; their blood shall be upon them.” That God says that what they do — men having sex up each other’s rectum, getting incurable diseases from being exposed to each others feces — is “an abomination” is a fact they cannot bear to hear. But it is the obvious truth none the less: history shows that no country that has sunk into sodomy has remained a world power. But to this group freedom must die to prevent this plain truth from being known.

To truly win a war your ideas must prevail, not just your guns. As previously stated, major, life-changing wars can be fought without a bullet being fired. Because no bullets have been fired — yet — many Americans do not realize that we have been fighting a civil war for many years in the US. The most serious battles have been fought in public school classrooms, where parents do not know what is happening. What is happening is that the parents’ ideas of the reality of God and morality are being challenged and ridiculed, and the children coerced into believing atheistic ideas, including the practice of sodomy, with no opposing viewpoints allowed. In the end, freedom loving Americans lost these battles, and freedom was driven out of public schools. Freedom of speech and of religion is banned. Only the atheistic Humanist religion’s idea that man came into existence by evolution may be presented in public school classrooms. There is no freedom to present any other viewpoint.

The light of truth always exposes the darkness of errors, provided the light is allowed to shine. The reason Humanists hate freedom so is because they know that most children would never believe in the baseless doctrine of evolution, which is the basic dogma of the atheistic Humanist religion, if freedom of speech were allowed in the classroom to expose evolution for the damnable lie that it is.

So we have this war between those who believe in freedom, and those who hate it. Most (but not all) freedom haters are in the Democrat Party now in power. Thus the deceptively named “Hate-Crimes” bills to deny freedom of speech to Christians; and the lyingly named “Fairness Doctrine” to deny freedom of speech to conservative talk show hosts; and the grossly misnamed “Health Care” bill to rob all Americans of their freedom to make their own decisions concerning their health. The “Hate-Crimes” bills are themselves hate crimes against Christians. The “Fairness Doctrine” is total unfairness designed to silence all who disagree with atheistic Humanist religious dogma. And the “Health Care” bill has little to do with health, nothing to do with care (the Democrat leaders are internationalists who couldn’t care less about the American people), but is all about controlling and enslaving us.

Obviously, freedom lovers are in severe danger of losing this war of ideas. How did humanists, socialists, and communists — people who despise freedom and have fought us in many wars — get into power with such a majority that they cannot ever be outvoted? What possessed the America people to vote their enemies in as their leaders? How did we get into such a terrible predicament? Answer: by allowing generation after generation of American children to be brainwashed into atheism in public schools, thus turning a large percentage of them into atheist Democrat voters. How shameful that Christian parents have been so unconcerned for their children as to submit them to such immoral and ungodly ideas. Materialism caused this. Christian parents lost faith in God, and placed their faith in the false socialist idea that government can give us what actually only God can give. Socialism’s appeal has always been to the depraved nature of man to want to force others by unjust laws to pay for something we want — in this case a “free” (to us) education for our children. That is sin (robbery) and is the root cause that the Chicago mafia is presently ruling over us. Unless we repent of this evil idea of our enemies, we are doomed.